Aren Bahia isn’t your typical entrepreneur. The bearded, tattoo-covered spiritual guru now resides in Bali and is one of the co-founders of YogiLab. He’s a deeply humble and spiritual fellow now, but things weren’t always this way.

Like many people, Bahia had worked a series of unfulfilling jobs before finding their true calling. However, unlike most people, Bahia’s career was one of the most dangerous professions imaginable: a drug dealer.

Bahia was recently featured on The Help Me Rhonda Show, a podcast where Rhonda Swan, founder and CEO of the Unstoppable Branding Agency, interviews successful and inspiring entrepreneurs. In this episode, Bahia told his compelling story of going from a danger-filled drug-dealing life to one of the world’s most passionate spiritual leaders.

“So this season, I am interviewing deep characters […]  that have gone from a space that they really didn’t love themselves into a space where they now can really see and look and rock and reflect and realize who they’ve become or where they’ve come from,” said Swan.

The world of drug dealing initially fascinated him. He vividly remembers meeting the Sinaloa Cartel in Mexico at a gigantic mansion that Michael Jordan and Mike Tyson had previously rented.

At the time, Bahia pursued yoga as a side hobby. He was a former kickboxer but felt like he’d suffered too much head trauma from the sport and sought a more peaceful alternative.

“It was funny because I was pulling up in a Mercedes with three cell phones and a Gucci jacket,” Bahia told Swan. “Then I’d be doing downward dog before checking my phones and seeing what all my messages across the country were.”

Despite initially feeling out of place, Bahia admitted that he found a strange peace within yoga. It provided him with some respite from his otherwise chaotic world.

The one thing that convinced him to turn his life around was an unusual source of inspiration: the movie Eat, Pray, Love. He instantly fell in love with the idea of going to Bali.

Two days later, Bahia arrived in what felt like a dreamland. Bali was everything he’d hoped it to be and more — warm weather, beautiful scenery, and, most of all, a reprieve from his otherwise chaotic life.

He quickly resumed his past hobby of yoga, figuring it would help get him into the right state of mind. After a few sessions, he decided that he wanted to become a yoga instructor because, well, “what else am I going to do?”. After all, he’d never booked a return flight home and therefore had no obligations to return anytime soon.

Bahia stood out like a sore thumb during his yoga training sessions with his diamond earrings and Louis Vuitton shirt. But that never deterred him. On the contrary, his first few months in training were pivotal to his growth.

“It opened my eyes,” said Bahia. “It was the start of like, hey, there’s more out there. I saw a glimpse that there’s this new other world where I could be somebody else. I could choose to be someone that was compassionate and loving and kind and did good things and, you know, stood for things other than what I stood for, which were material things back at home.”

“How does somebody that’s in that level of fog actually see a light?” Swan asked. “Do you think that there was some form of a calling or some kind of awareness that came through you that was trying to say ‘let’s go’?”

“God, I really do think that there were many things that happened to get me out,” Bahia replied. “And there were many times where I was just like, ‘this doesn’t feel right.’ My intuition was screaming, and there’s only so much you can do until it’s gonna start working.”

Bahia struggled to navigate two worlds: his current life as a drug dealer and his new potential life as a yoga instructor. While the life of a yoga teacher filled him with hope, he still clung to his drug dealer ways. He’d spend his breaks during class making deals over the phone to ensure money was still coming in.

Bahia knew deep down that he couldn’t live a dual life of both a gangster drug dealer and a spiritual guru. Yet, he was reluctant to let his past go.

“So what opened your eyes completely to let it go?” Swan asked.

On graduation day, teacher Denise Payne told him he was the only person in his class (or perhaps ever) to have failed the yoga teacher training.

“I can’t pass you for this yoga teacher training,” she said.

“What do you mean?” he replied.

“I can’t put this stamp on your certificate,” she said. “You didn’t really show up.”

Deep down, Bahia knew she was right. As much as he enjoyed yoga class, he hadn’t been fully dedicated. He’d skipped plenty of his classes getting drunk and going on Tinder dates. Even when he was in class, he often clashed with the teacher due to his self-righteousness and inflated ego.

“I was trying my best to shrug it off like this is no big deal to me,” Bahia said. “But it hurt. It was actually like it hit my ego.”

“When are you actually going to show up for something?” Payne asked. “When will you actually care enough to try for anything? Because you didn’t care here, and you could be so great if you’ve just applied yourself.”

The words hurt like a knife. Bahia bitterly watched his classmates celebrate their graduation as they donned their new mala beads. He wished he could have joined them but knew that he didn’t deserve it.

The flight home from Bali was full of shame and regret. Bahia felt like he turned up a chance at a better life. But, going back home meant facing the realities of his drug dealing business head-on. It meant returning to a world of danger, uncertainty, and unease.

When Bahia returned home, he already had a drug deal lined up. However, it was a deal with two people he didn’t know very well. They were coming to his apartment to make the exchange, and he wasn’t sure what was going to happen.

Could these people be dangerous? Would they try to rob him or do something even worse?

Bahia had a gun with a large silencer on it just in case but had to find a hiding place. Unfortunately, it was too big to fit in the drawer, so he hid it underneath the stove.

Then he had to prepare himself mentally.

“There’s nothing to worry about,” he frantically tried reassuring himself. “You’re not going to let yourself get robbed if it happens.”

Bahia started to panic. His thoughts raced at what felt like a million miles a minute.

“Is this really what I’m doing with my life?” he asked. “Am I really going to shoot someone over cocaine?”

It was then and there he decided that he couldn’t ever return to this life. Facing failure and rejection from his yoga teacher was nothing compared to the constant panic which filled his body. His life could end that very afternoon, all thanks to his poor life choices. Something had to change.

“I need to get back to Bali, I need to start my life over, and I need to take a chance on myself and be a good person,” he told himself. “I just need to get out of this world. This is not me anymore.”

Bahia returned to Payne’s yoga training. She was in utter disbelief when she saw him. Her former failed pupil wanted a second chance to turn things around and make a difference.

“I was hoping you would come back,” she told him. “And I can’t believe you’re here.”

With her help, Bahia finished his necessary 500 hours of yoga training. He eventually served time for his crimes in a maximum-security prison in Bali. He used that as an additional opportunity to teach yoga to more pupils and reach his goal of 500 hours.

Bahia’s decision to switch from drug dealing to yoga changed his life. In fact, one could argue that it saved his life. Who knows what could’ve happened to him if he stayed in his crime-fueled ways?

So where is Bahia now?

Well, he co-founded YogiLab, a personal growth and biohacking incubator which combines entrepreneurship with spirituality. Through his course, Bahia shares his experience with meditation, breathwork, and other things which helped him change his life. He’s also helped fund a school for disabled children and enabled kids a nice place to sleep through the Happy Mattress Project.

His next goal is to get more people meditating. Specifically, he wants to get 80 million people to meditate — about 1% of the population.

Bahia cites the Maharishi Effect, a study which shows that where 1% of the population meditates correlates with lower crime levels. In addition, studies show that meditation changes your brain for the better, so you can imagine how that would affect a wide-scale population.

“What made me able to be a more successful human being was when I started developing my intellect and mindset,” Bahia said. “Take care of your mind, meditate, and practice mindfulness. That is a superpower that’s available to all of us. Because if you take care of the quality of your mind, it shapes your perceptions that shape the way you see the world.”

Want to hear more amazing stories about how entrepreneurs are changing their lives and the world? Follow The Help Me Rhonda Show on Spotify and follow Rhonda Swan on Instagram. 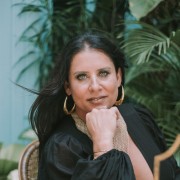 Meet the Witches of Wall Street